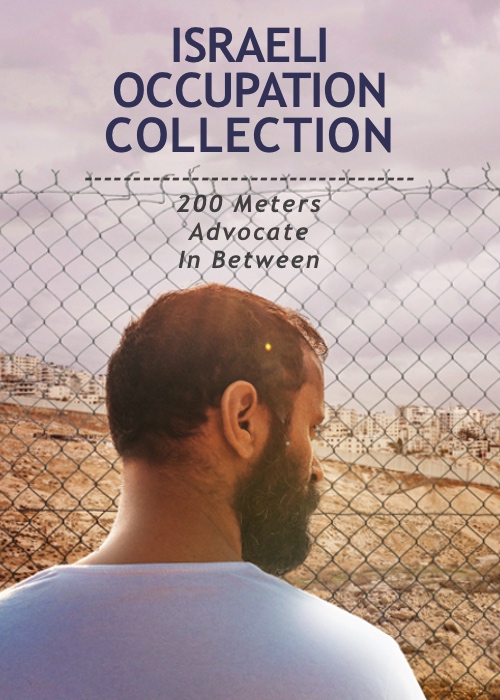 What does it mean to be a Palestinian living in Israel today? The Israeli Occupation Collection asks this question and many more. Exploring the nuances of life under Israeli occupation, each film pays close attention to the daily realities of Palestinians both culturally and personally.

200 METERS (2020, directed by Ameen Nayfeh)
Mustafa and his wife Salwa live 200 meters apart in villages separated by the Israeli border wall. One day he gets a call every parent dreads: his son has been injured in an accident. Rushing to cross the Israeli checkpoint, Mustafa is denied on a technicality. But a father’s love won’t give up and he will do anything to reach his son. A 200 meter distance becomes a 200 kilometer odyssey, as Mustafa, left with no choice, attempts to smuggle himself to the other side of the wall.

ADVOCATE (2019, directed by Philippe Bellaiche and Rachel Leah Jones)
Since the early 1970s, attorney Lea Tsemel has made a career out of defending Palestinians in Israeli courts: feminists and fundamentalists, non-violent demonstrators and armed militants. As far as most Israelis are concerned, she defends the indefensible. As far as Palestinians are concerned, she's more than an attorney, she’s an advocate. ADVOCATE follows Tsemel’s caseload in real-time, including the high-profile trial of a 13-year-old boy — her youngest client to date.

IN BETWEEN (2016, directed by Maysaloun Hamoud)
In Maysaloun Hamoud's feature debut, 3 Palestinian women sharing an apartment in the heart of Tel Aviv find themselves doing a balancing act between tradition and modernity, citizenship and culture, fealty and freedom.