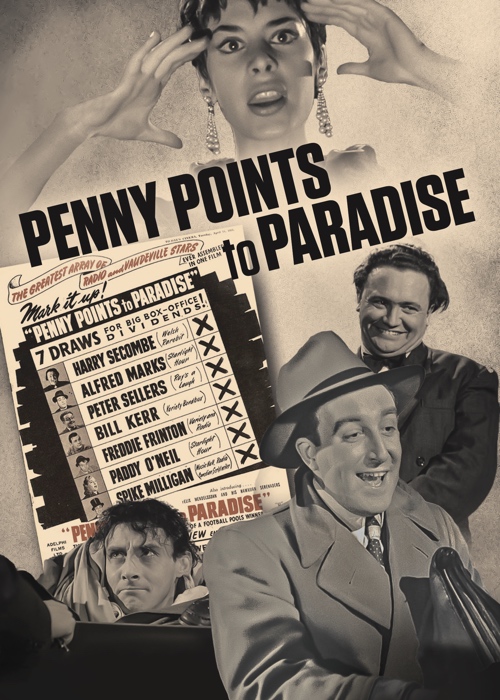 Pools winner Harry Flakers celebrates his £100,000 jackpot with a visit to a Brighton guesthouse, accompanied by his friend, Spike Donnelly. Christine Russell, a young woman staying at the guesthouse, plans to marry Harry for his money; her friend, Sheila Gilroy, disapproves of her plan. Also resident at the guesthouse are two villainous counterfeiters, Alfred Haynes and Digger Graves, and bluff con-man the Major. Harry keeps his winnings in a suitcase and hides it up the chimney of the room he shares with Spike. But while the friends are out at a variety show, Haynes and Graves discover the cache of money, and concoct a plan to replace the real banknotes with counterfeit ones. Later, at a public house, the Major sells Haynes some worthless shares in a non-existent company. Haynes pays the Major with worthless counterfeit banknotes. That night, while Harry and Spike are sleeping, Haynes and Graves replace Harry's real banknotes with fake money. Unaware of the exchange, the following morning Harry gives Sheila what he thinks is a genuine five pound note to buy some cigarettes. The tobacconist realises the note is a fake and alerts the police, who visit the guesthouse. While Sheila is questioned, the forgers, fearful of discovery, leave the guest house. Haynes accidentally leaves his printing machine behind. Christine finds it and realises what has happened. Harry and Spike are bewildered to discover that Harry's money has been replaced by fake banknotes. Christine tells them about the printing machine and they realise that Haynes and Graves are responsible. Alerting the Major to the deception, they pursue the villains. Meanwhile, the police, who think that Spike and Harry are the forgers, pursue them. Haynes and Graves take refuge in a waxworks. While Harry, Spike, Christine, Sheila and the Major search for them, the police search for Harry and Spike. Unaware that they are overheard by a policeman, Haynes and Graves chat about their crime, and they are apprehended by the police. Haynes dupes the policeman into letting him go. In a double wedding, Spike marries Sheila while Christine marries Harry - at gunpoint.